WHAT IS A PAG?

The PAG stands for the Pathway, Annotated-list and Gene-sigature, which is a group of genes that belong to the same pathway, share common biological processes, co-expression genes in a particular experiment belonging to the same disease, or any defination of the groups of the gene(e.g. drug targets, microRNA targets, protein family, isozyme and so on). The PAGs' network construction reveals higher level relationships among PAGs. The potential usage of the PAGs' network are exploration of the potential biological pathways in upstream and downstream involved in etiology of the disease, mining microRNA-biological processes, repostioning drugs based on the PAGs level and so on.

For a selected PAG, PAGER can construct gene interaction and gene regulation networks of genes within the PAG. For examples of how to use PAGER, please see Use Cases.

PAGER has several unique features which have not been provided before by other existing tools.

For examples of how to use PAGER, please see Use Cases.

A temporary space for users to save PAGs. Users can construct 2 types of PAGs' networks, regulatory and co-membership PAGs' networks, of the PAGs in PAG Box. Users click on the PAG Box status (on the top of the page) to access their PAG Box.

A temporary space for users to save genes. Users can construct 2 types of gene networks, gene interaction and gene regulation networks, of the genes in Gene Box. Users click on the Gene Box status (on the top of the page) to access their Gene Box.

PAGER was implemented by using PHP language version 5 and Codeigniter version 2.1.3. PAGER data was stored in Oracle 12g database maintained by Indiana University and was connected to PHP server by Oracle Instant Client software. P-value for each edge in PAGs' networks was computed on the fly by using hypergeometric function provided by PDL. For gene and PAGs' networks visualization in PAGER, cytoscape.js, a JavaScript graph library for network visualization. 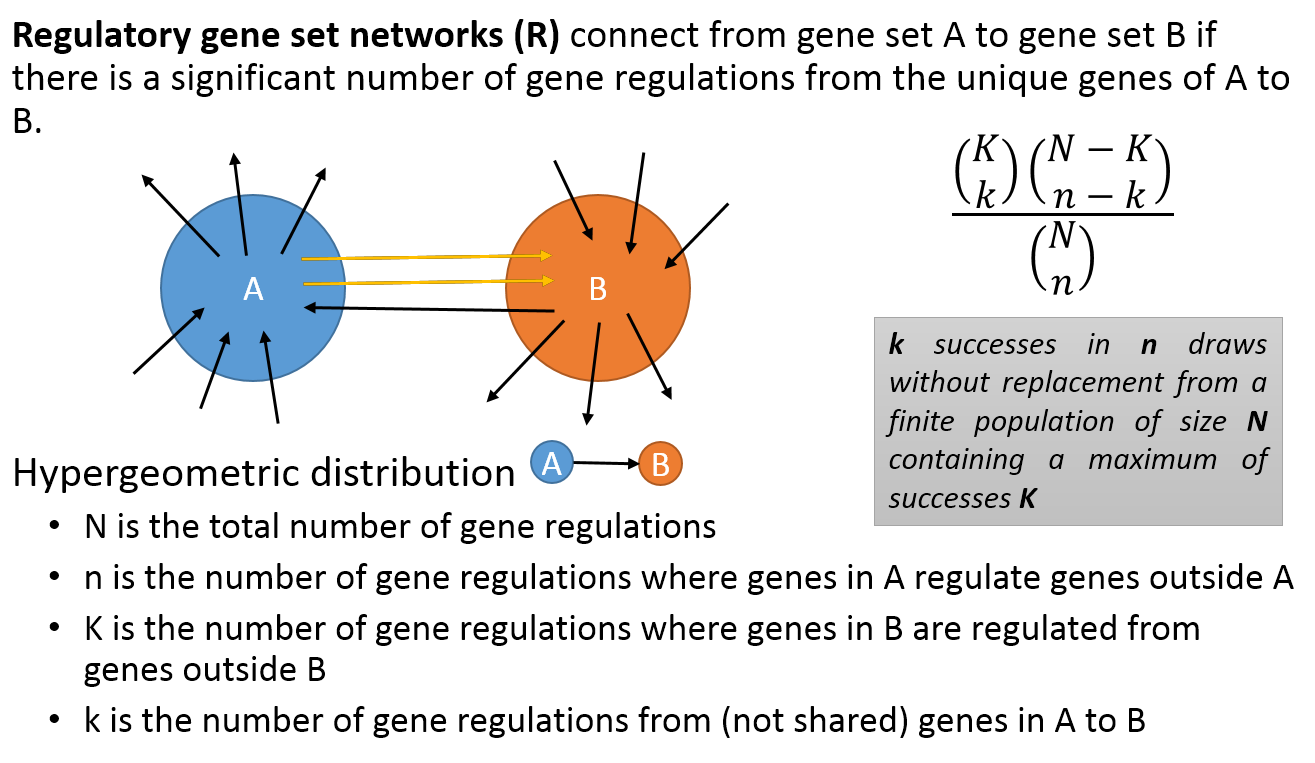 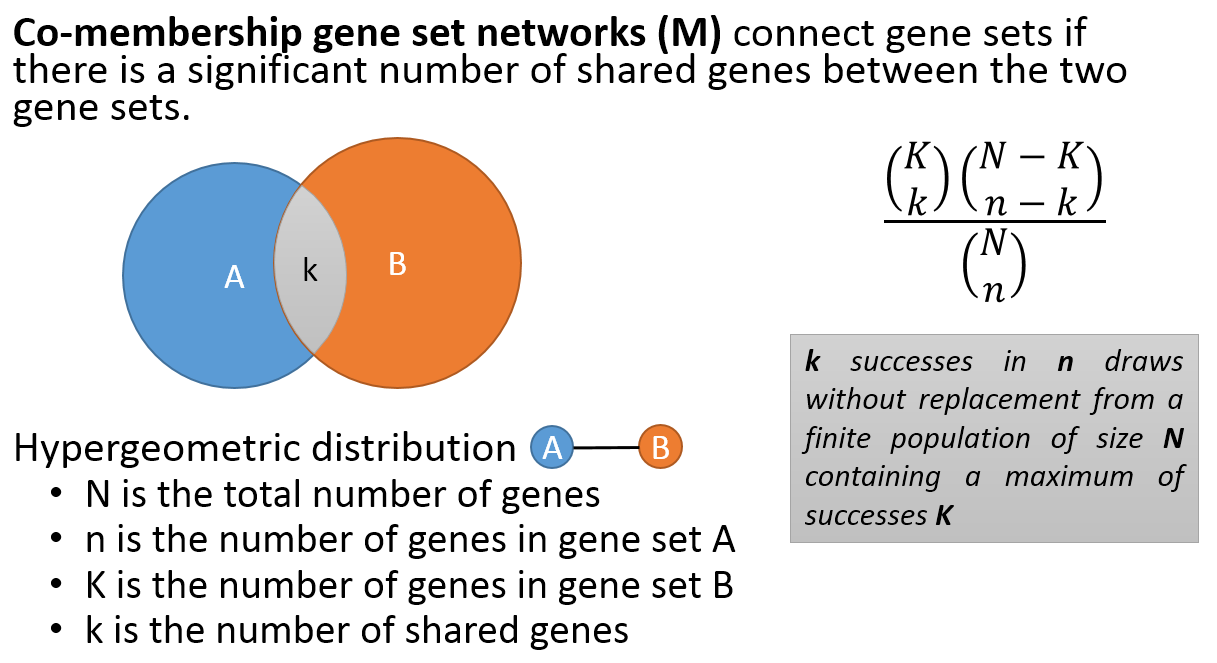 This is the same calculation used in HPD, so please see Similarity Score Scoring Method for more information.

Users go to PAGER home page and enter searching terms such as a disease name or a gene symbol. For this use case, we entered “non small cell lung” to search for non-small cell lung cancer related PAGs. PAGER returned a list of results. The list contains genes and PAGs which relate to the searching terms in different aspects.

The next step is clicking on the 160 PAGs which relate to “non small cell lung”. PAGER displayed a list of the 160 PAGs. The PAGs can be sorted by name, size, organism, or data source. We filtered only PAGs whose sizes is between 5 and 500 and are from humans. PAGs can be added to PAG Box for further analysis. Checkboxes in the left most column were checked if PAGs were already in the PAG Box. 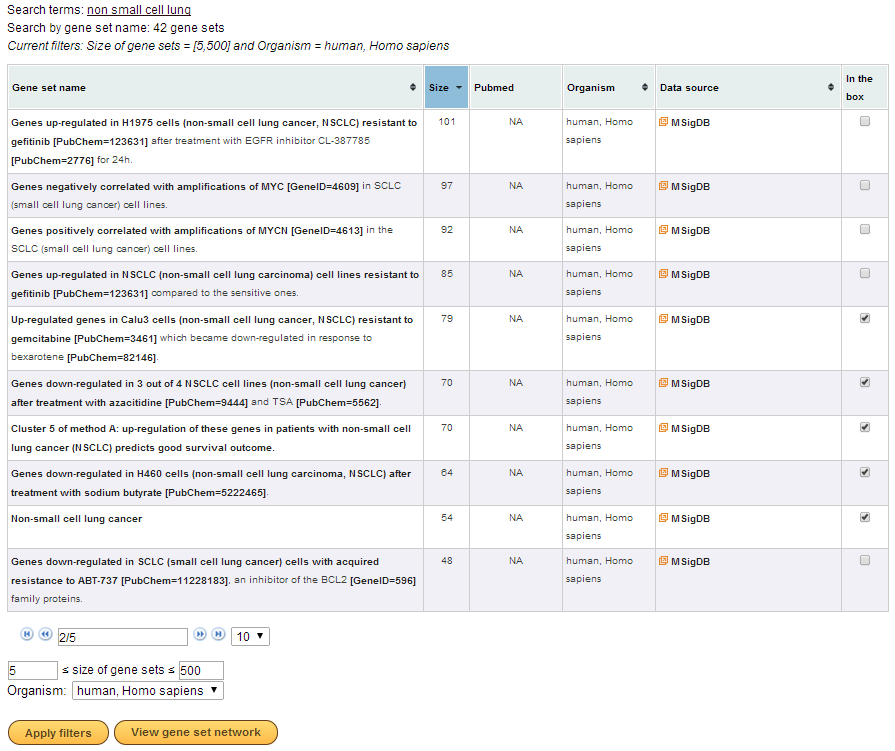 On PAGER home page, users can enter a list of genes obtained from their experiment or other data sources in order to search for related PAGs. In this use case, a list of 94 non-small cell lung cancer genes were entered. PAGER displayed PAGs which related to the list of 94 genes and 28 PAGs were displayed after we applied filters.

PAGER counted the number of shared genes and calculated a significant value for each PAG. Users can click on a PAG name to see more detail about a PAG or add PAGs into PAG Box as in the previous use case. 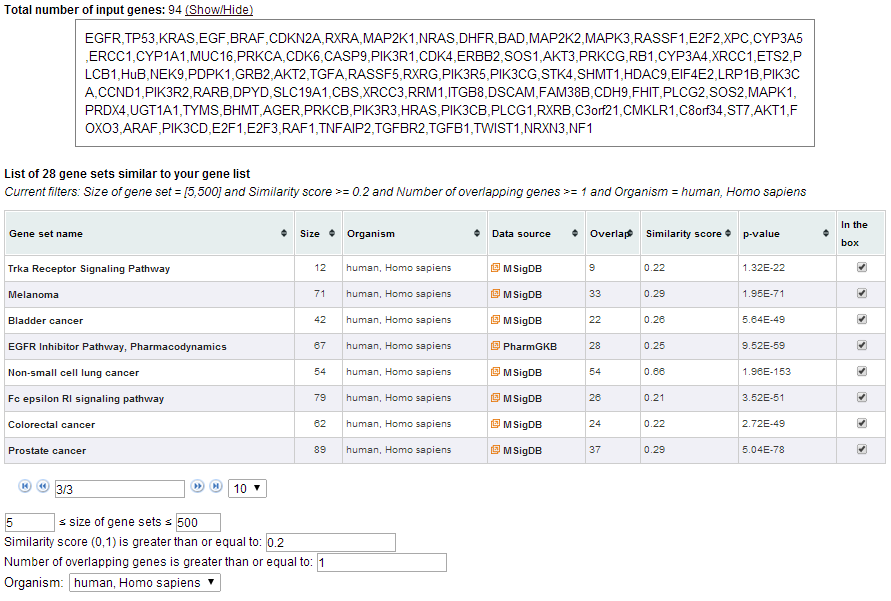 Users can construct co-membership and regulatory PAGs' networks of their selected PAGs. For example, 20 PAGs were added into PAG Box. 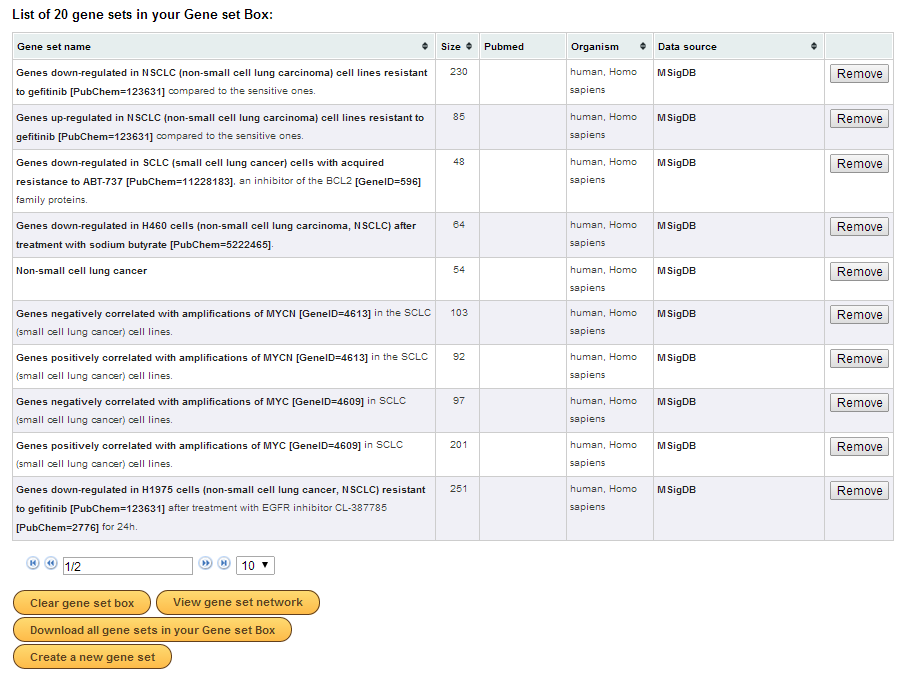 On the PAG Box page, co-membership and regulatory PAGs' networks were constructed and displayed by clicking “View PAGs' network” button. 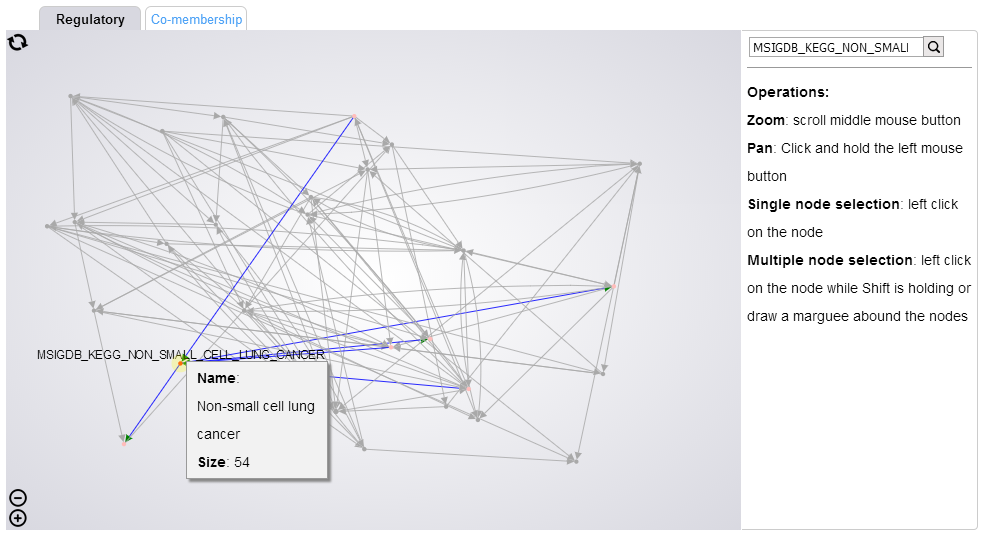 An instruction of using PAGs' network visualization was displayed on the right side. Users move a mouse over a PAG to see more detail about the PAG and see its neighbors, and click on an edge to see the detail of the edge. Users drag a mouse to cover PAG nodes for multiple selection. On the network page, users can also add or remove a PAG from PAG Box by clicking on a checkbox. Users select a PAG and click the link on the right hand side to see more detail about the PAG. 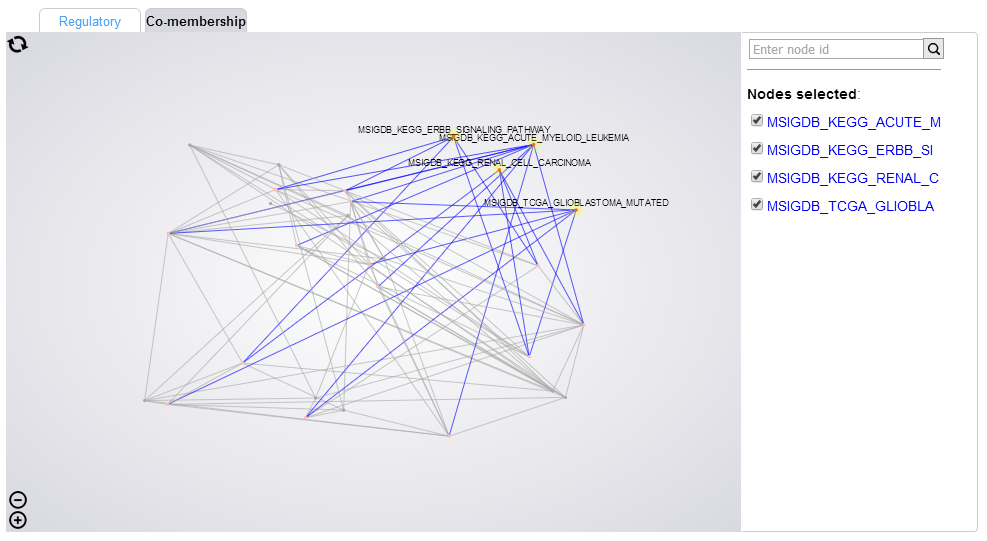 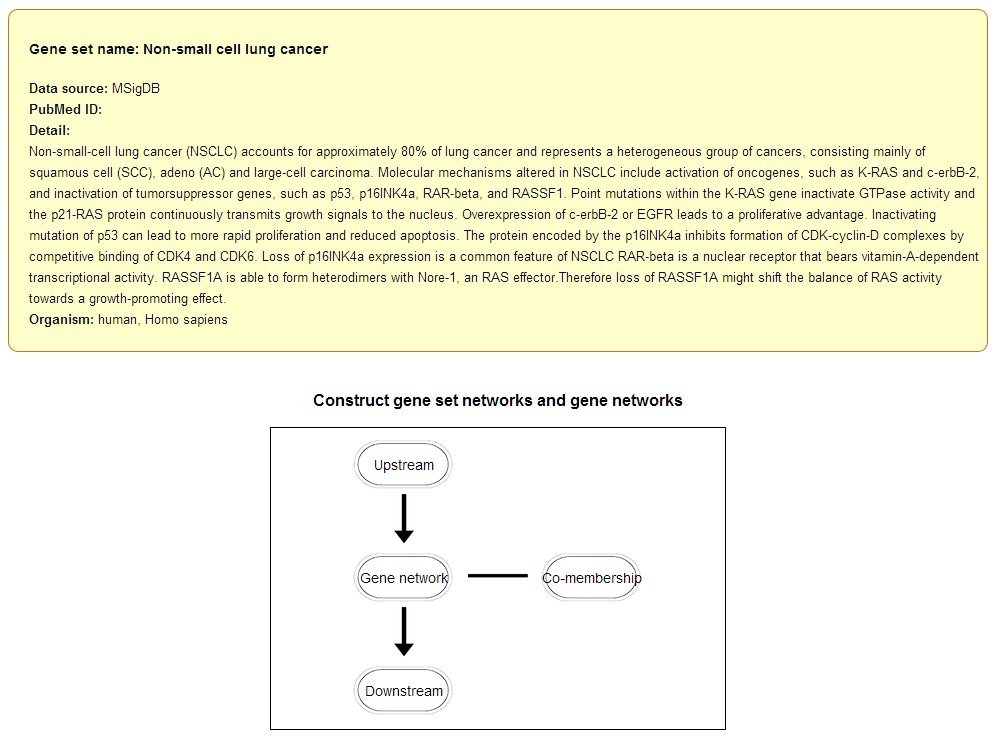 Viewing Gene Networks of Genes inside a PAG 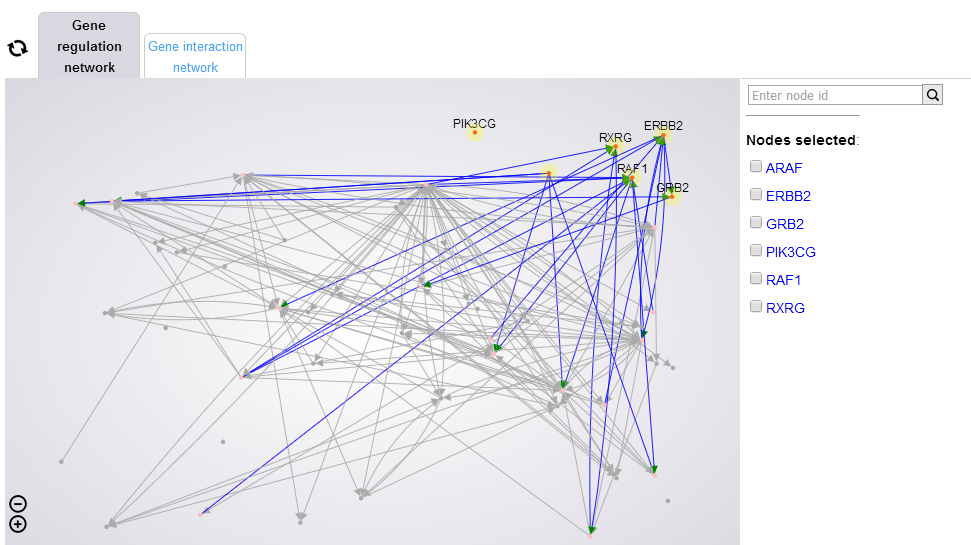 This use case showed how PAGER can be used to construct disease specific PAGs' networks. In this scenario, a list of disease related genes was not required. For example, we searched for non-small cell lung cancer related PAGs by using “non small cell lung”. The terms matched with the names of 160 PAGs. 5 sample human PAGs were added to PAG Box. On the PAG Box page, users create a new PAG by clicking on Create a new PAG button. PAGER displayed a list of gene and the number of PAGs which contain a particular gene. In this example, AKAP12 gene has the highest frequency suggesting that it is an important gene among the five PAGs in PAG Box. On this page, when users click on Use all genes to search by a list of genes, PAGER automatically generate a list of genes and fill in the text area in PAGER home page. 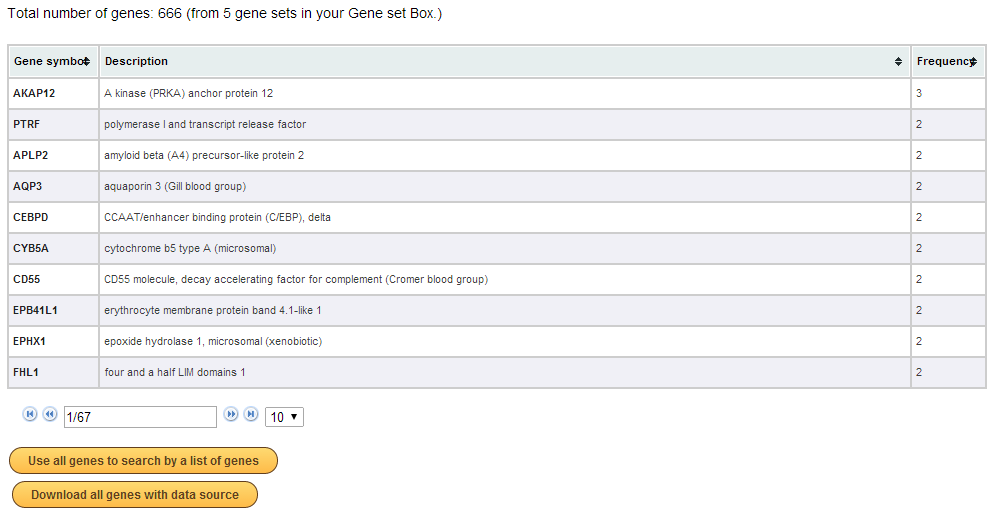